Can you remember the difference between two hex color values? Me neither! Entering visual representations of recent-changes into version control makes review of past changes easier & speeds acclimation to a new web project. Join me for a review of current methods & how to choose the best for you!

Can you remember the difference between two hex color values? Me neither! Entering visual representations of recently-changed elements into version control makes review of past changes easier & speeds acclimation to a new web project, especially for visual learners. Surprisingly, methods for including images in your version control aren’t standardized and are rarely used outside of large companies, and the rest of us are left checking out every major commit and viewing changes locally! Join me for a review of methods currently in use and discuss the benefits and drawbacks of each. The audience will learn from a survey of tools used by both designers and web developers, what methods are most appropriate for individual projects, & how these methods differ from those used at some of the largest companies (Google, eBay, etc.). Finding a method to track changes in your visual elements will save our future contributors (and future selves!) the pain of having to distinguish #2dc651 (lime green) from #34a34e (darker(!) lime green) and ultimately make our commit histories cleaner and our repos easier to navigate in ways that many of us have never imagined!

About me & this topic

Before I was a programmer, I worked with in a science that relies on visual work and spent a lot of time thinking about how to incorporate our images and screenshots into our research. As I entered web development, I found myself asking the same questions and began learning as much as I could about ways that folks do/don’t incorporate images into their workflows and what they see as the benefits/costs. 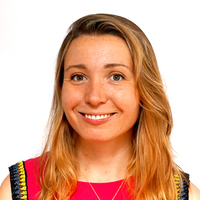 Before becoming a programmer, Veronica was a researcher with an eye for process improvement (she helped pick the Mars Curiosity Rover’s landing site!). She loves exploring the web and teaching, and speaks on building the tooling & docs you need and has co-taught a PyCon tutorial on using web-scraping and machine learning to predict Oscar winners. When she isn’t thinking about how the web can be better for developers, she enjoys blogging and snuggling as many cats as possible.