Create 3D rendered animations in a few lines of Python, for teaching concepts in Physics and Astronomy. Let your students write some simple code to, for example, model the movement of a bouncing ball due to gravity, and with only a couple of lines of extra code, actually render and animate the ball.

Visual Python, or VPython, was developed in by Bruce Sherwood, Ruth Chabay, and David Scherer in 2000 as an educational tool, allowing students to create and animate 3D rendered scenes in a few lines of Python, to explore concepts in Physics, Chemistry and Astronomy for themselves. In the last few years, VPYthon has become much easier to use, evolving into GlowScript (an entirely web-based environment with no need to install any software), and supporting Jupyter notebooks. I’ll show how I’ve used VPYthon to let my students model for themselves how Jupiter disrupts the orbit of asteroids, see how stars and galaxies form clusters, demonstrate phases of the Moon and eclipses, see gas atoms get faster as you decrease the volume of a chamber, and explore other concepts in Physics and Astronomy. 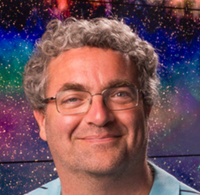 I’m an astronomer who moved from research into telescope and instrumentation automation, starting with an automated search for supernovae and extra-solar planets using an optical telescope, and more recently, working in the operations team for a large radio telescope in the Murchison region of Western Australia.